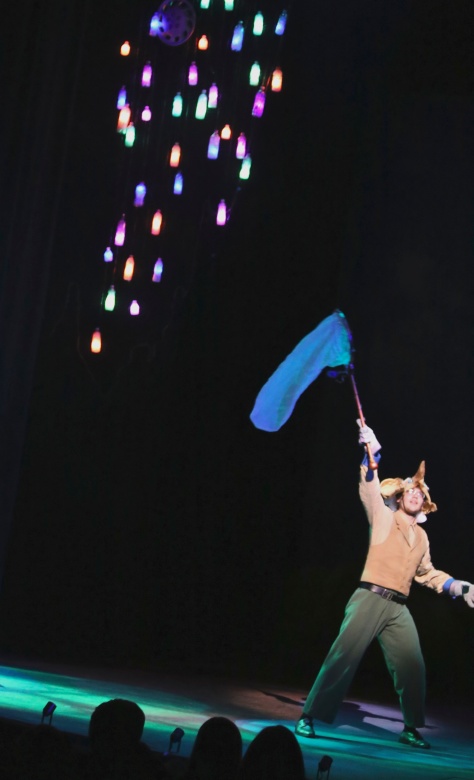 A  password protected Vimeo recording of our BFG production is available to students and friends at https://vimeo.com/167669157 ( Email Margaret Larlham for password: larlham@mac.com)

Directed by Margaret Larlham for School of Theatre, Television and Film Season 2016

Director’s Note of Thanks:

I read a lot of Roald Dahl to my children when they were young and they turned out to be exceptional adults. (Some credit goes to their father I have to admit.)

So, despite this mischievous story of an idiosyncratic giant exhibiting wayward language skills and somewhat irregular diet, I highly recommend The BFG to human beans of all ages to toward refining their citizenshippery!

The story begins and ends in faraway London. Casting for our play was drawn from local talent so I have to thank Peter Larlham and his “Accents and Dialects” class and also a visiting exchange student from the University of Kent, Elena Malekkou, for much help on making our cast’s English dialects believable.

In this story Sophie and the BFG (with a little help from the Queen of England) take on a pack of nasty horrid giants. The giants have made a home base in a remote and desolate land, to my mind as the set designer, rather like the edges of the polluted Salton Sea. I am very grateful for the advisory input from Ralph Funicello and a splendid team of faculty and student designers who have contributed to this particular vision of the giant world that you see on our stage.

By a tremendous stroke of luck we have a guest star in this production; the BFG puppet who was created by the extraordinarily inventive Eric van Wyk for Imagination Stage’s recent production. His workshop/visit to introduce giant puppetry to us in February was truly inspiring for our production team and especially costume designer Nao Kobayashi, who has matched the awesome vitality of the BFG puppet with her own brand of ingenuity that you can see on display in our gang of greedy murderous giants.

From the many people I need to thank I additionally acknowledge Charlie Zirkovsky, Adrian Alita, Martina Sunnas and John Brown for their invaluable help and input.

Finally, and in a whacky piñata-type conclusion of twenty years or so of directing plays for youth here at SDSU, I thank the Director, Faculty, Staff, and Students of the School of Theatre, Television, and Film and the Dean of College of Professional and Fine Arts for some remarkable romps on the Don Powell Stage, through Fire and Mist and Clouds, the Mississippi, the Jungle, Wonderland and Neverland! And now…

Let’s represent the freely free—and help all those in need!

Without a doubt—we’ll give a shout to Sophie

TYA at SDSU with Margaret Larlham